10% of proceeds are donated to wildlife conservation

This South American canid, the maned wolf, looks a little more like a fox with long legs than a wolf, but is actually not closely related to either. They are their own distinct species and the only member of its genus, Chrysocyon. Their long legs and thick coats have evolved to help them thrive in high grass savannas. Adult maned wolves stand at around 3 feet tall at the shoulders and weigh about 50 pounds. They range through central and eastern South America including northern Argentina, South and Central Brazil, Paraguay, Bolivia and southern Peru.

Primarily solitary hunters, maned wolves can consume small mammals, birds, and insects. Their small teeth and jaw make it more difficult to take down large prey. What is not known by most, is that this species is in fact omnivorous, with fruits and vegetables making up around 50% of their diet. They have been seen to have a particular interest in lobeira, a small tomato-like berry whose name means "fruit of the wolf,” but have also been observed eating sugarcane, tubers, and other fruit.

While many are fans of their big fluffy ears, most aren’t aware of their potent odor until they get a little closer. Maned wolf urine and feces have a distinct powerful odor that they use to mark their territory, generally on small hills and termite mounds along their borders. It has been described by those who have been fortunate, or unfortunate, to come across them as the way skunks smell to people.

Widely misunderstood, the maned wolf has been historically persecuted by farmers who believed that they were eating their livestock. Habitat loss due to human encroachment and agriculture has also caused a decrease in their population and attributes to certain disease introduction. They are listed as near threatened by the IUCN, and endangered by the Brazilian Red List and the U.S. Fish and Wildlife Service Endangered Species List, with an estimation of only around 23,600 left in the wild.

A BAT-iful Time of Year

The plush was a large size and super soft, my son LOVED his zebra. The book had a lot of simple to understand facts, colorful photos, and was easy for my boys to read a loud. The straws, pencil, and bookmark were very cute but I was most impressed that a recipe card was included in the binder. We made the South African bread right away and made a whole night of it based off our box. Genuinely impressed and the value was great. 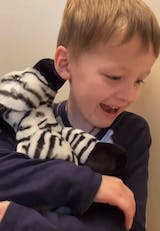 We really enjoyed this box! My 10 year old loved her tiger and read the information book to her sister over and over again! We were surprised at not just the amazing quality of the stuffed animal, but also the amount of thought that went into to all the additional items that came with it. We are super excited to see what comes with our next box!

I got the Leopard and a couple other big 12" inch animals for my nephews 2` kids. They are 7 and 4. Loved them both. Emmie's Leopard is a big hit with her. The Leopard was fed and hugged at Thanksgiving. Thanks to WLT!!

When I opened my package I thought oh my god, what a perfect size, what a wonderful and round little guy. The right amount of smallness. I love my new crab friend. A great addition to my growing crab army