Save the Eagles Day originated in the Village of Ridgefield Park, New Jersey, in 2015 as an effort to save a pair of nesting bald eagles. The nesting pair, fondly named Alice and Al, had nested along Overpeck Creek since at least 2011. The community of Ridgefield Park and the Bergen County Audubon Society came together to protect not only the tree that the pair nested in, but also to protect the land around the area so that the birds would have a safe and healthy environment to hunt and raise their chicks in. Since 2015, January 10 has been named Save the Eagles Day. While the official day is only 5 years old, the protection of Bald Eagles started almost 80 years ago, and is not considered one of the ultimate Endangered Species Act success stories.

Our National Symbol Brought Back The large, regal, fluffy bird has been our national symbol since 1782 when it made its debut on the Great Seal of the United States. However, this iconic bird almost disappeared forever. In the 1940s, one of the first synthetic insecticides, DDT or dichloro-diphenyl-trichloroethane, was developed. Its effectiveness as a pesticide made it a popular choice, but the runoff from the agriculture fields began to reach water systems and animal species started to disappear. Fish and other aquatic life were being affected by the DDT, and then other larger predatory animals, like the Bald Eagle, were then consuming these infected fish.

For Bald Eagles specifically, when they would have DDT in their systems, their ability to reproduce was greatly affected. If they were able to lay eggs, the shells were so thin that the chicks would rarely survive. From once as many as 100,000 nesting eagles in the 1780s, by 1963 there were only about 487 nesting pairs.

The bald eagle first gained federal protection in 1940 when Congress passed the Bald Eagle Protection Act, but it wasn’t until 1962 when Rachel Carson’s book Silent Spring was published that the dangers of DDT really became recognized. Almost a decade later, in 1972, the Environmental Protection Agency took the historic and, at the time, controversial step and banned the use of DDT in the United States. In 1973 the Endangered Species Act was signed into law and the Bald Eagle was officially listed as an endangered species. Their protection was eventually expanded to include banning any disturbance or collection of eagles’ nests and habitats of all sorts. By 1997, the number of nesting pairs increased to more than 5,000, and on August 9, 2007, the Bald Eagle was removed from the list of Threatened and Endangered Species.

While if anyone asks you to name a species of eagle, Bald Eagles are probably the first one you think of, there are actually over 60 different species of eagles ranging from Africa and Asia to throughout North and South America. In fact, only two eagle species live in North America. Our national symbol, the Bald Eagle, and the national bird of Mexico, the Golden Eagle.

All eagles belong to the Accipitridae family, which are one of the 4 families that all bird species fall into. Accipitridae are small to large birds with strong hooked bills and a similar morphology to each other. While we would love to cover all 60 species of eagles, we instead picked out a few of our favorites from all over the world. This is the Crowned Eagle, Stephanoaetus coronatus. They are considered the most powerful eagle species in Africa and can kill animals weighing up to 44 pounds which is more than four times their size. Crowned Eagles live in the tall woodland forests and rainforests of Africa. They have short and broad wings and a long tail that helps guide them like a rudder guides a boat to allow the eagle to fly easily through the branches. A Brahminy Kite, Haliastur indus indus. These broad-winged birds inhabit mainly coastal regions in places such as India, Pakistan, Southeast Asia and Australia. They are the official mascot of the capital and largest city of Indonesia, Jakarta. A Bateleur eagle, Terathopius ecaudatus. This eagle is typically found in Zimbabwe, and their name comes from the French word for tightrope walker, a reference to the side-to-side rocking of its wingtips while gliding. They are one of the most famous snake eagles and can spend 4-5 hours each day in the air looking for food which includes snakes, as well as other birds, small and medium-sized mammals, lizards, and carrion. A Madagascar fish eagle, Haliaeetus vociferoides. This species is considered critically endangered and one of the rarest birds of prey. They live close to rocky coastal habitats, lakes, rivers, mangrove swamps, and wooded areas and depend on large trees for perches and nesting. Nearly half of all species of eagles, over 30 of them, are considered vulnerable, threatened or endangered. They are birds that need extra protection as they are exceptionally vulnerable to different risks raptors face because of their long reproductive cycles and slow population growth.

The greatest threats to wild eagle populations are human made. With no natural predators, interactions with humans are the most dangerous threat eagles face along with pesticides, overfishing, and human development.

Lead is extremely dangerous for eagles because of their powerful digestive system. If an eagle ingests even a tiny fragment of lead, powerful stomach acids will break down the lead, and it will be released into the bloodstream. It then can lead to damaged the nervous systems and organs leading to motor control problems and ultimately organ failure. Even a tiny amount of lead is lethal to an eagle within days. Choose Eco-Friendly Pest Control - While spraying chemicals on your plants and gardens seem like a quick solution, the harmful effects are hard to see as they runoff into waterways and are transferred to other mammals, birds, and reptiles. Thankfully more research has been done and even better ways of protecting your plants are emerging that not only keep the bad insects away, but also promote healthier plants and beneficial insects. Look into options such as diatomaceous earth, neem oil, or adding some beneficial insect friends such as ladybugs or praying mantis to protect your plants naturally. Also choosing to purchase organic produce and food also helps to support a safer industry and planet. Go Lead-Free - To help protect eagles and other wildlife, consider switching to lead-free fishing tackle and ammunition. An estimated 10 million to 20 million birds and other animals die each year from lead poisoning in the United States. This occurs when animals scavenge on carcasses shot and contaminated with lead bullet fragments, or pick up and eat spent lead-shot pellets or lost fishing weights, mistaking them for food or grit. Do it, not only for wildlife, but for yourself as well because lead bullets can explode and fragment into minute particles in shot game and can spread throughout meat which isn’t healthy to eat. Share Your Knowledge - Do your own research and share this blog along with what you learn with others. One of the biggest reasons things aren’t changing is lack of awareness. It is easy to get caught up in simple solutions or doing what our parents did that might not have been the most effective or eco-friendly. There is still so much room for growth and opportunity and the best way to share that with others is to lead by example, and let others ask why you choose the decisions you do.

A great place to start is by joining our Wildlife Guardians Facebook Group. We created a safe space for people to ask questions and share what they are learning. Whether it is an awesome new conservation organization to support, a yummy recipe, or just questions about how to use less plastic, you can connect with other people wanting to create a world where all things can thrive and share their love for wildlife.

Orange is for Orangutan 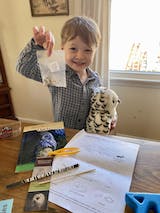